My Dad just retired this week.  Congrats to him for a long, distinguished career! Now, with all of that free time – what to do? We overheard him talking about the endless possibilities:

To help further occupy him, we got him an iPad. Yesterday he was asking about Twitter and I think he just unlocked the ravioli badge at his favorite Italian restaurant.
uummm… #creatingdigitalmonster

It’s been while since we’ve written but there are too many wonderfully ridiculous and mundane details of home office life that we can’t keep to ourselves.

The home office is back and fully (dys)functional.  There have been some changes in the past 6 months but we’ll catch you up.  Stay tuned. 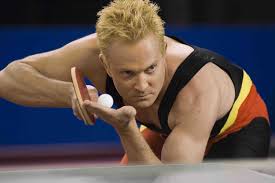 yes, we got married and I got a new job, but
the big news is my improved forehand!
(my new office is living like it is 1999 –  ping pong table, kegerator and a sweet odor in the hallways at 420, daily)

FACT: H is 5’7″, with red hair and fair skin. She also drove our tiny rental car around the small towns in Mexico.

FACT: The average height of a Mexican woman is 5’1″  . During our journey we didn’t witness one other woman driving.

For much of our time exploring Mayan Mexico, locals (mostly children) stared at us. They were particularly awestruck by H. I nicknamed her La Roja Diabla.

the legend grows of the 7 foot tall Ginger who drove Senor W across the Yucatan!

I love how tech savy CNN has become. They want to be so hip with their Twitter pie charts and their Facebook polls. They are so in your face about how “with it” they are –  it’s uncomfortable.

hey Glenn Beck: interviewing people via satellite is so 2006

During the post State of the Union coverage, there were blackberries, multiple laptops, giant touch screens and a sensory overload of flashing images and graphics.  I am sure in 2 weeks, Larry King will be casually thumbing through his interview notes on an iPad.

screw the netbook, i got me a new Trapper Keeper and some looseleaf paper

Let me dust off my desktop Dilbert calendar

I went outside the home office today to interview. Nice enough company with some good people but I am not certain if I am ready to re-enter this kind of world.

As I was walked through the maze of 6 foot high gray cubicles, I overheard someone talking about fixing their PTO reports. Then the HR woman I was speaking to was interrupted by someone who wanted to clarify their use of floating holidays.

whatever a PTO report is, surely it requires a specific format & cover sheet

Not sure if they liked me or I liked them but I am too tired to think about it right now.

I have a bad cough and a headache so I am just gonna take off a bit early.

H’ss niece and nephew are participating in a school science fair. We here at the home office are big supporters of the scientific method, so as any good aunt and almost-uncle would do, we agreed to participate in the “how many pounds of recycling does a family generate each week” study.

After sending in this week (week 3)s’ data,  I was informed that the study was in fact over.

We are appalled at the methodology being used.

– 2 weeks? really? is that really enough to go on? really? (one big football game and a load of  Sports Illustrateds could easily skew this experiment)
– where’s the hypothesis? I didn’t hear any hypothesis?
–  What measuring methods were used, exactly? I stepped on a 15 year old radial bathroom scale holding a garbage pail full of newspapers and Bud Lite empties while H stuffed the remaining discarded dog food cans and bottles of $8 wine in my arms…then i deducted my body weight.  When we saw the other 2 families’ to-the-hundredth-of-a-pound weigh ins conducted with fancy new scales, eyebrows were raised.

H has suggested that I go the elementary school science fair and ask pointed questions to find out if the experiment would hold up to the standards of Galileo, Aristotle and Descartes.  H also wants me to drill 8 year old nephew on the specifics of his “evaporation” experiment. bogus.

H has a hard time refusing any market research related activity (ie. focus groups on ANYTHING). We received a call two weeks ago about participating in a “fun” study around a “new sitcom” and H excitedly agreed. I use quotes around “new sitcom” because at today’s Home Office Lunch Hour, we viewed the DVD (today was our assigned day to watch it) and the show was neither new nor funny.

poor guy is now forever immortalized and incessantly mocked on message boards. Although the show is getting more burn than if it actually made it to the network!

Over  sloppy joes , we watched some sloppy tv  – The Rocky Laporte Show. Wow – what a disaster.  It was so formulaic of a CBS family sitcom, it almost seemed fake.

– slightly overweight, likeable, boorish husband: check
– snarky but loving wife who gets angry when husband doesn’t celebrate anniversary but in the end loves him for him – check!
– sidekick “buddy” who provides many of the better one liners: check
– two kids: one know it all older child who tries to give Dad advice; one dorky younger kid: check

Looks like the copyright on this failed sitcom was 2006. H and I quickly surmised that this research had nothing to do with the show and everything to do with the commercials. We found message boards and various blog posts supporting our theory (and lambasting this show). Market Research Co X must’ve purchased this debacle from CBS and appear to have been using this for the last 4 years.

We’ll see tomorrow when we get the follow up call, but I really really really hope I am wrong so I can hear H’s responses to detailed questions about Rocky Laporte’s  plot, character development and potential story arcs.

I am writing this post as I listen to H “at work” on the phone. Minutes ago a phone call awoke her from a mid afternoon nap and to our delight it was a call recruiting for a focus group next week. Focus groups have been a nice source of extra income, that H has been gleefully garnering over the past 18 months.*

H put this call on speakerphone so i could enjoy. Some highlights:

– Apparently H is currently making a six figure salary (then – why is she not paying rent??? Sounds like a far cry from the $387/week she gets from the good people of the Empire State gov’t.)

–  H visits Google News at least 12 times per week. (umm – I think she is confusing Google News with TMZ)

– To the question “when was the last time you did a focus group”, Hol responded: “Not sure..Had to be years ago. I think it was for credit cards” (or maybe a few weeks ago, for the second iphone focus group she’s attended in the last 3 months)

– Focus group participants are not supposed to have worked – or know someone who has worked –  in PR, Marketing or Media. (if one were to look at resumes in the Home Office: check, check and …check!)

pretty soon H is going to have to wear wigs and disguises. there’s only so many times (at the same facilities) that the opinionated readhed can slip under the radar

*If there was such a thing as a  professional focus-grouper, I think that would be H’s calling. I’ve never seen someone so giddy over the possibility to spend an hour and a half with 8-12 strangers, expressing her opinion, stretching the truth**, and eating free salty snacks and soda. The $100-$200 cash ain’t bad either.

**In the past, I’ve overhead H on the screening calls describing what baby strollers she uses, what kind of food our cats eat and her local political activism. In case you didn’t know: we have no kids or cats and the only interaction H has with local politicians is apologizing to them if  our dog sticks her snoot in their pants when they ring the doorbell.

The parental units were very generous to the home office employees this holiday season. One gift from H’s mom was a check made out to both of us. Do we both need to endorse it? Is this a subtle nod that we should already have a joint account (ie. why are we not married yet?). Hmmm.

This also begs the question – what should we allocate these “joint” holiday funds to? Since we both need to agree, H suggested that whoever has a thought on how to spend this cash, must submit an official proposal first – which will then be reviewed.  Grand idea. Break out the whiteboard for a brainstorming session.

umm… Interesting proposal, H – Peach Os, Wine and more Fleece Pants? But, did you get the memo? Where’s your cover sheet?

Upon hearing our discussion, our friend snidely remarked that perhaps rent, utilities or cable would be a good place to start.  Way to stomp on my holiday spirit.* Submit a proposal, smart ass!

* Apparently, (despite 30+ years of Hanukkah) I am very good at celebrating xmas. Who knew? H has been calling me “Kris F’in Kringle”.

Jewish? Oh – you’re in good company. So was JC!

Live from the Home Office
Blog at WordPress.com.