Posted on January 29, 2010 by homeoffice | 3 Comments
There is a Live From the Home Office #1 Fan who has a new job at a media company.  I don’t know if it’s because he’s the new guy, but his desk is immediately behind the chairs where they record the daily podcasts.  Meaning the whole world can see his computer screen.  It’s pretty funny, and we check it out to see what he’s up to, always hoping to catch him on ESPN.com. 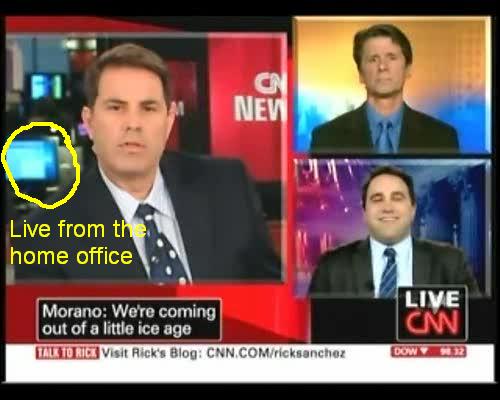 So, for example, his screen is here. But closer. And bigger. How about a LiveFromTheHomeOffice.com shout out?

This is an official lobby for it. You’ll get the title of VP, Marketing, LiveFromTheHomeOffice.com.

We told him that his desk placement gives him perfect opportunity to become a cult Internet hero.  How about dressing in a different color cape every day?  Wacky hat?  Just sitting there, doing your job as usual, but wearing a funny message on your back during the podcast taping.  The Buzz would propel those podcasts further than any New Media discusssion ever would!  If I had a choice between watching people debate the iPad from a site with just two guys on a set, or two guys on a set with the wacky Internet Marketer in the background, I’m choosing the latter.

This entry was posted in Uncategorized. Bookmark the permalink.